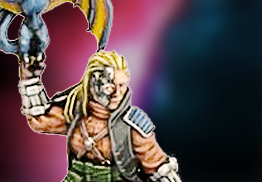 Forsaken Chieftain
Guiding the survival of their people, Chieftains utilise the element of surprise to best their foes.

Booby Traps (1)
During its main action, this model may expend one of its allocated command points to trigger a booby trap, up to a maximum of once per turn. When a booby trap is triggered, select an enemy unit which is both taking cover and visible to the model triggering it. That unit gains D3+1 STs. A single enemy unit cannot be affected by more than one booby trap per turn.

Shadow Master
For each model with this ability, one additional friendly unit can utilize the Shadow Strike ability in each end phase (instead of just 1 unit) and during deployment, an additional friendly unit in reserve can be declared as arriving via Shadow Strike (instead of just 1 unit). In addition, a friendly unit within 18” of a model with this ability automatically passes its shadow strike discipline check, unless the unit is shell-shocked.

Customized Weapons
All weapons this model is equipped with permanently gain +1 PEN, +1 DAM and the Unstable ability (if they don’t already have it). Grenades & CQ Explosives are excluded.

Unstable
When a ‘1’ is rolled to hit with this attack, place a number of STs onto the firing unit equal to the current DAM value of the attack.

Extensive Cybernetics
This model permanently improves its MAS characteristic by +1.

Grenade Harness
This model has cluster grenades, molotov bombs and overcharged powercells. A model may not have more than one grenade harness.

Relic: Failed rolls to hit with this weapon may be re-rolled. Your force may not contain more than one relic weapon.