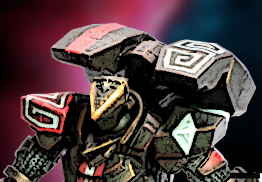 Aerial Insertion
(exclusive ability) When performing a Dash action from reserve, this unit can make an unlimited range dynamic move, but cannot end within 6” of the enemy or be on the move. If ending this dynamic move touching an obstacle or area terrain, it gains +2D3 STs. When returning to the game as a reinforcement, this unit may only utilize aerial insertion if you expend 1 command point (from your command point pool).

Dodge (1)
Ignore 1 hit each round of shooting. Cannot be used the same round that cover or another ability ignores hits.

Prime Ability - Mobile Strike
Once per turn, when an active friendly unit within 24" that is on the move shoots, it ignores the usual wild fire penalty for being on the move for that round of shooting.

Combat Gauntlet with Reflex Shield
This champion is equipped with a Combat Gauntlet (see profile above). In addition, it may force enemy melee weapon hits to be re-rolled during CQ fighting that targets this unit.


Defensive Countermeasures
This champion may re-roll misses when firing defensively, including defensive fire that is wild.