Glue is literally the thing that holds our hobby together. You can quickly come unstuck, however, if you use the wrong glue for the job, so in this article we're going over the common types of hobby glues and where they are best used.

A note on safety: Many glues have fumes that are not particularly good for your health. Contact with skin, eyes or other body parts can also cause irritation, or result in a mess that's difficult to remove. Always use any of the below glues in a well ventilated area, and avoid skin contact as much as possible. 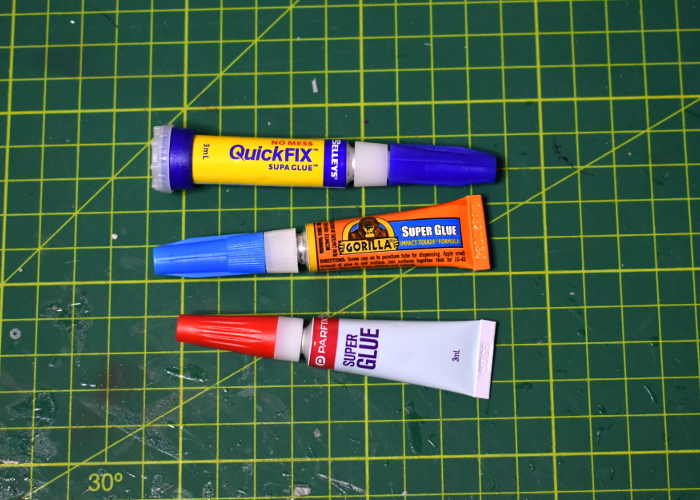 
Let's start with the most common and most well known glue used for hobby work - the humble superglue. Superglue is a fast-setting, strong adhesive that is suitable for gluing a whole raft of different things to other things. Because it's so quick-setting, it's also infamous for sticking people's fingers together.

Superglue works best in a superfine layer between two flat surfaces, so it works best on flat, rigid materials. As such, it's can glue plastic, metal or resin models or terrain pieces, and is also good for cardboard, although it can soak in a bit. The solvents in superglue with dissolve expanded polystyrene (aka styrofoam), however. The bond formed by superglue is strong, but brittle. So parts can pop off if a model is dropped, but this can also be useful if you want to temporarily bond something - putting a model on a temporary base for painting, for example.

There are a wide range of different superglues on the market, with different viscosities, setting times and applicators. You might need to experiment to find the one that works best for you. As with many things, you get what you pay for - cheaper superglues can be fine, or they can be overly watery and not stick very well, or clog up quickly. Avoid the small, 'single-use' tubes unless you are actually intending them for a single use. They're not as robust as other glue tubes, and can leak or dry out in storage. 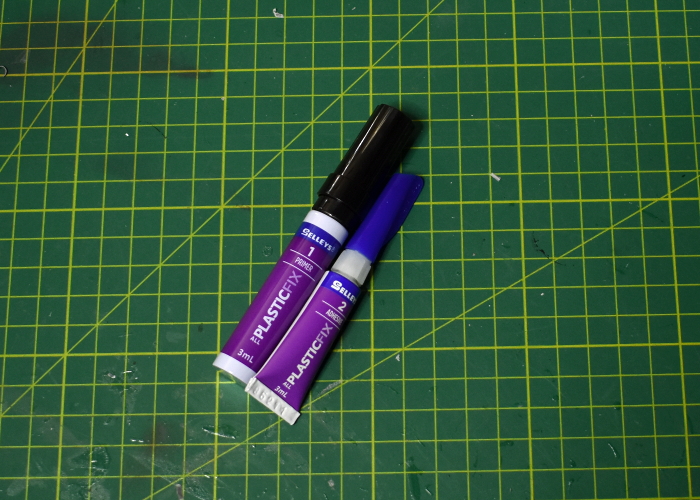 
Accelerators like Zip-Kicker can be used to help superglue grab faster, and can also strengthen the bond on materials that otherwise might not hold well. These sometimes come as paired sets (like above) specifically for gluing different types of plastics. The primer is used on both surfaces, and then the glue is applied. 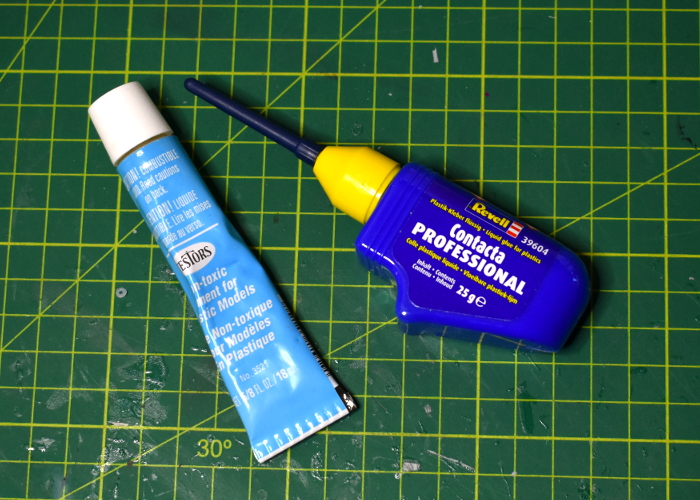 
Formulated specifically for use on plastic (HIPS, or High Impact Polystyrene) models, poly cement only works on this material. It won't glue other types of plastic, metal or resin. This sort of glue slightly melts the plastic surfaces together, forming a much stronger bond than superglue.

Most poly cements take a little longer to grab on than superglue does, which gives you a little time to fiddle with part placement or posing when assembling a model. 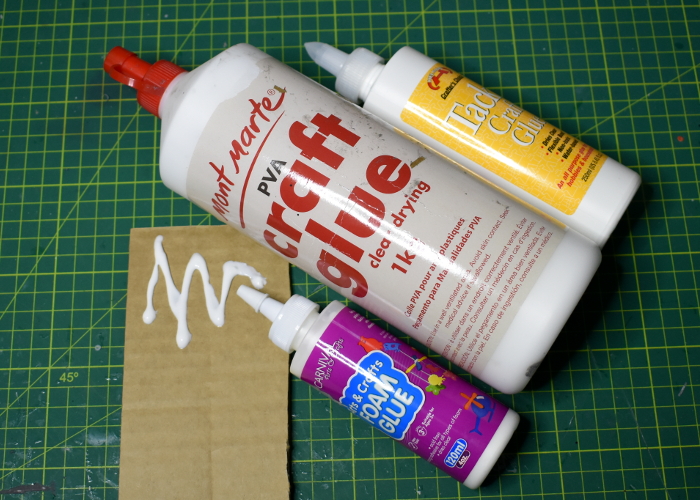 
There are a range of different craft or hobby glues sold under different names, but aside from some slight differences in thickness and drying speed, they are all more or less the same thing.

For hobby purposes, PVA glue is more useful for terrain than assembling models. It gives a good bond on wood, cardboard, or expanded polystyrene, and can also be used to glue plastic parts to any of these. PVA is commonly used for gluing sand and other details onto miniature bases, and a light coat of diluted PVA can be painted over expanded polystyrene to seal it before painting with sprays.

Some hobbyists also use PVA glue for making water features, but this isn't ideal. PVA shrinks as it sets, and over time this can cause flat 'water' surfaces to turn concave. It is also water-soluble, even when it appears fully set, and will absorb moisture from the air in humid weather, causing the 'water' to fog. 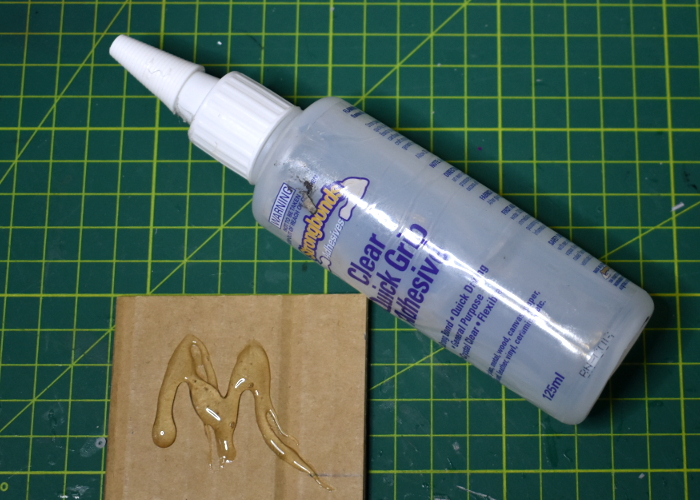 
Also covering a wide range of differently labelled glues, these tend to be very sticky, fairly fast-drying glues that can be used for sticking a wide range of materials. This sort of glue will dissolve expanded polystyrene, however. It's also generally very thick and stringy, making it difficult to work with. As a result, it's really not suitable for building models, and PVA glue or superglue would generally be preferable for terrain, although it has its uses for making spider webs or ooze effects.

All Plastics or 'Anything' Glues 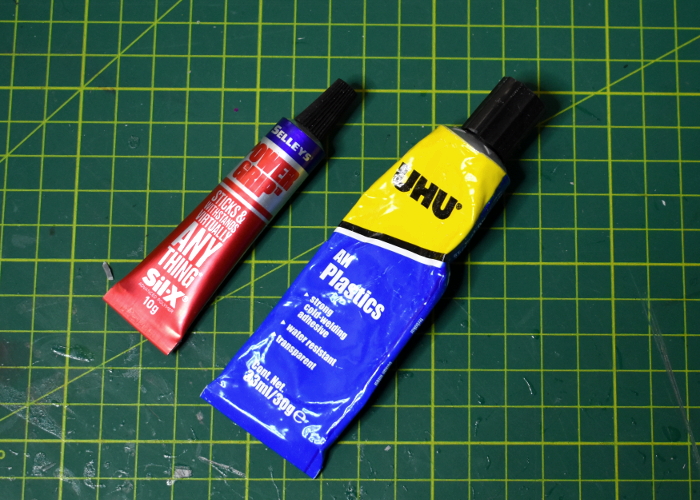 Glue ALL the things.


There is a growing number of these sorts of 'glue anything to anything else' glues on the market. These can be particularly useful for terrain projects using hardware components or non-hobby plastics, which can often form a poor bond with superglue. Some of these are more useful than others, depending on the project - the UHU glue above, for example, shrinks considerably as it dries, which can result in thinner parts flexing and popping apart, although it forms a strong bond with more solid components. 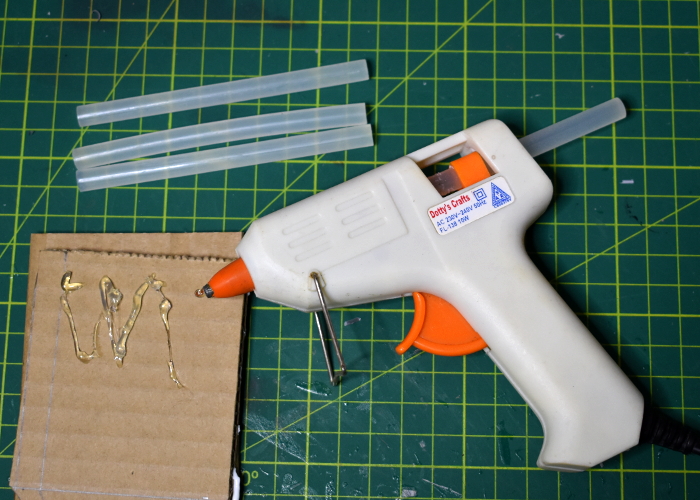 
Hot glue is similar in use and properties to clear craft glue, but comes in the form of solid sticks of glue that are pushed through a heating 'gun'. Obviously, this makes it unsuitable to use on anything heat sensitive, and it doesn't form a particularly strong bond, but is handy when you want things to stick quickly.

The last glue type to mention here, Epoxy Glue comes as two separate parts that are mixed together to form a super-strong bond. Epoxy was once the standard go-to solution for bonding metal or resin models, as it is stronger than a regular superglue. The need to mix it, and in many cases clamp it while setting for a proper bond, makes it harder to work with though, and so a superglue with an accelerant or primer would generally be preferable.

For more modeling articles covering a wide range of different types of kits and materials, check out our Tips and Techniques, Modeling Articles and Terrain Building Articles Hobby sections.