The tabletop game of Maelstrom’s Edge is designed to complement the frantic skirmishes and tense battles depicted in the game’s setting, presenting new challenges every time you play. The rules make for a fast flowing simulation of the conflicts induced by the constant pressure of the Maelstrom’s approach, representing the circumstances and decisions a commander fighting at the Edge would have to face. The key features highlighted below present the core philosophies behind the Maelstrom’s Edge ruleset.

Maelstrom’s Edge is a squad-based skirmish tabletop wargame for two opposing sides featuring 28mm miniatures. Each side commands a small force of 20-40 combatants who are looking to survive the Maelstrom or exploit opportunities created by it.

A squad-based game is one where players move and shoot with entire units as opposed to doing so with individual models as in a pure skirmish game. However, unlike many other squad-based games, Maelstrom’s Edge focuses exclusively on smaller-sized units, typically of 1-5 models. Each unit has a wide array of tactical choices, roughly equivalent to those a single model in a skirmish game has. 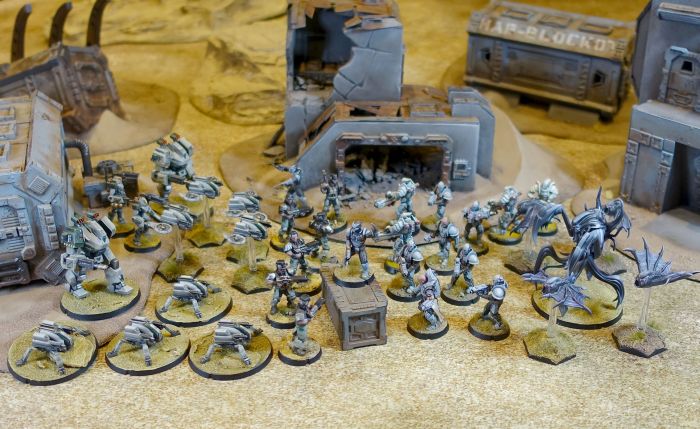 Maelstrom’s Edge is an alternating activation style of game, meaning you get to activate one or two units in a row (moving, shooting, etc., with each) before passing the opportunity to activate to the opposing side. This allows you to press the immediate advantage by activating two units in a row, or instead, wait to see more of what your opponent is planning by activating only a single unit.

Nearly all the rolls in Maelstrom’s Edge are what is known as a versus (VS) roll. The formula for determining whether a versus roll is a success or failure is always the same across the entire game, making it simple to learn and easy to remember. .

As the battle rages on the table, each side’s headquarters is constantly monitoring the situation and looking to lend support where able. This is represented by command points that players generate each turn. Command points can be used to bring back destroyed units as reinforcements, prevent the enemy from bringing back their own reinforcements or to reduce suppression on units that are near their command models. Choosing how and when to best use your command points can be the difference between victory and defeat. 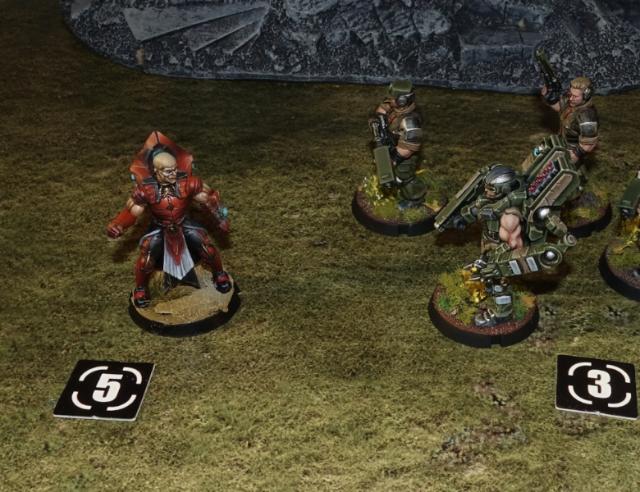 Suppression plays a major role in Maelstrom’s Edge. Whenever you shoot at an enemy unit, it becomes suppressed. This is represented by placing cinematically inspired, three-dimensional suppression tokens (STs) by the unit. The more suppression tokens a unit accumulates, the less likely it is to perform as desired when activated. This means you can still cripple the enemy’s plans even if you don’t cause any casualties! For example, units taking cover are incredibly difficult to destroy, but they tend to rack up tons of suppression tokens, making them vulnerable to deadly short-ranged firefights and close-quarters attacks. 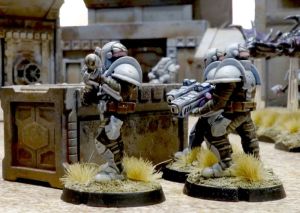 Cover is essential for a squad’s survival; only a reckless leader or perhaps a master-strategist is willing to leave their unit in the open for long. Even in cover, a unit is in trouble if it gets caught from the rear, where its cover will offer less protection. Hence, players need to be mindful of their squads’ facing. A squad’s line of sight and facing is determined by their squad leader model. Maelstrom’s Edge miniatures feature bases with easily distinguishable front and rear arc markings to help establish their facing.

Any time a unit is fired upon by an enemy within short range, they first get to fire a round of defensive fire at their would-be attackers. However, the amount of suppression they have suffered determines whether this is incredibly deadly or just a minor nuisance. Therefore, properly suppressing an enemy unit before attempting to engage it at short range is key.

Each Maelstrom’s Edge mission features several objective types, giving players multiple paths towards victory. Victory Points are tabulated at the end of each turn, and if you can manage to reach the total needed to complete the mission while also outpacing your opponent by a wide enough margin, then the game immediately ends with you as the victor! This makes accomplishing mission objectives from the first turn to the very last of paramount importance. 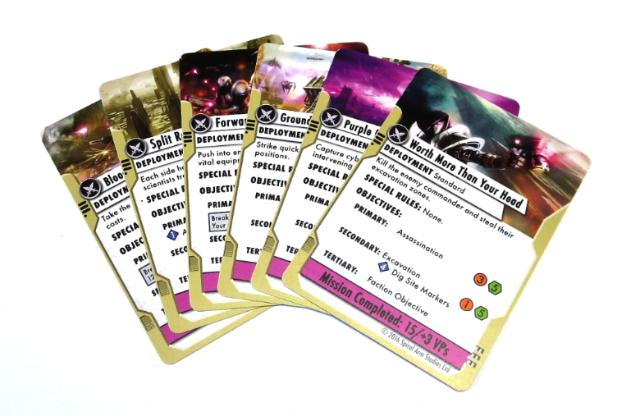 Get the rules now!