The Artarian fleet descended on the unsuspecting Foundation colony, space ripping open and massive ships spilling out into realspace from the brilliant chaos of the cybel network. Quickly overwhelming the meagre system defenses, the fleet took up orbit around the system's sole habitable planet. On the surface, militia and small deployments of SecDef from NexGen Neocortex and Kalman Industries franchises waited nervously. In the Fleet, Champions readied their massive, armoured suits for battle. 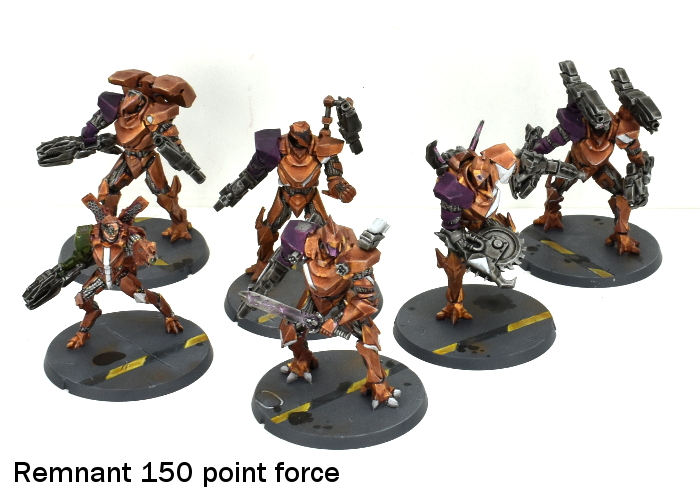 The Remnant force was comprised of two small Detachments: 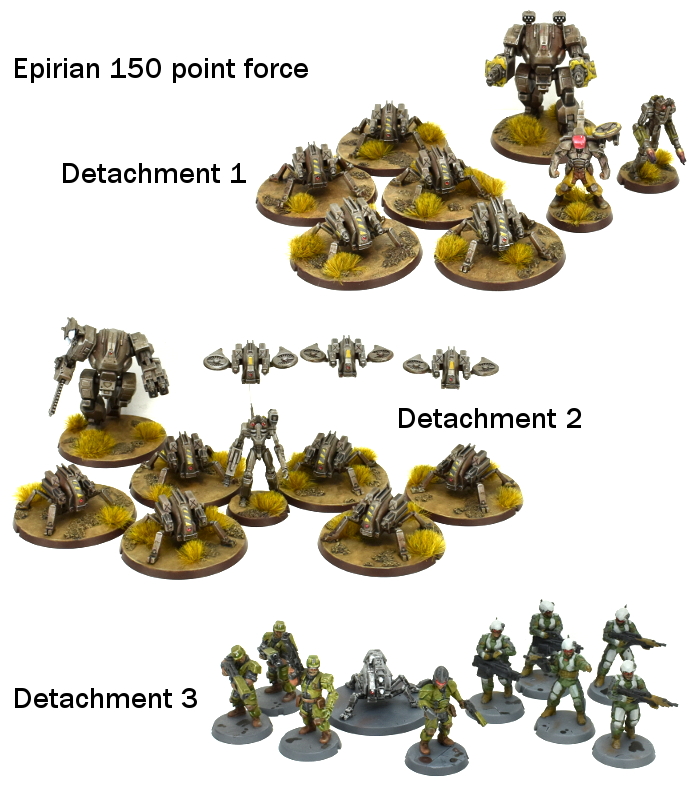 The Epirian force was comprised of three Detachments: 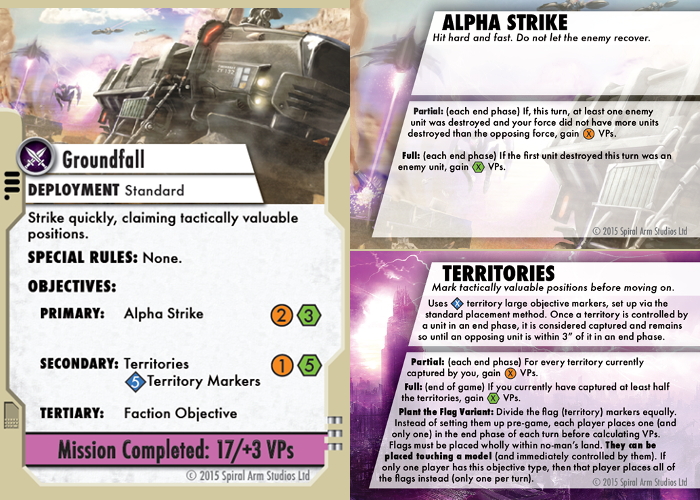 The mission for this battle was Groundfall, which uses the Alpha Strike and Territories Objectives. The Epirian Foundation also selected the Automated Uplink Relay Faction Objective, while the Remnant chose Epic Hero. The Remnant were the attackers. 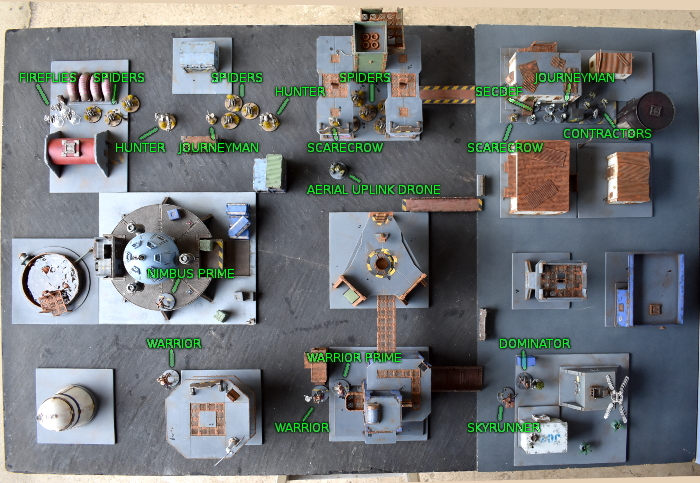 As the attacking force, the Remnant could choose which side had priority for the first turn, and chose to force the Epirians to make the first move. Starting out slowly, the Epirian Aerial Uplink Relay, which began the battle slightly out in No Man's Land, moved back towards the rest of the Epirian force for support. 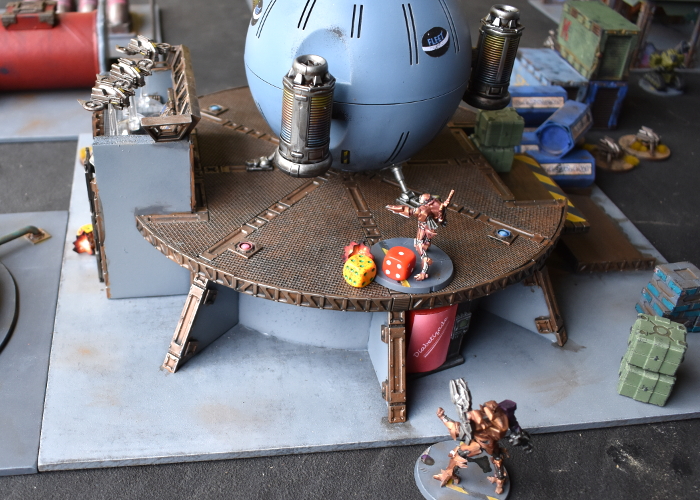 
On the other side of the table, the Fireflies dashed up onto the control tower, firing on the Nimbus, Painting the Nimbus but doing no damage as the shots were intercepted by cover. Taking advantage of the target lock from the Paint, the Flakk-equipped Hunter moved up alongside the shipping container stack before firing its cluster missiles at the out of sight Nimbus on the landing pad, failing to damage it. The Nimbus and nearby Warrior returned fire on the Fireflies, but the nimble drones avoided the enemy fire. 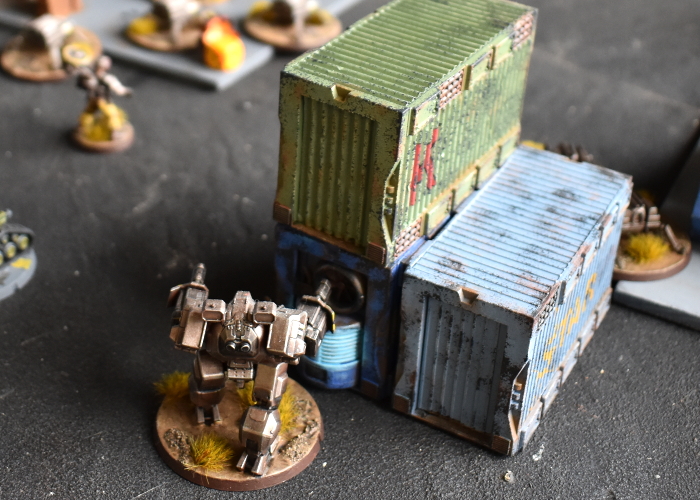 
Behind the Fireflies, one of the Spider units dashed up onto the objective on the Epirian right flank, while the flakk Spiders advanced up the middle of the battlefield, taking aim at, but missing, the Warrior Prime. The Prime, burning a command point for 2" extra movement, advanced up under the tower, returning fire on the flakk Spiders, killing one and then shaking off the suppression it had just accrued. Behind the Prime, the melee Warrior moved forward to control the central objective.

The remaining Spider unit and leading Journeyman moved up to support the flakk Spiders, while the Command Scarecrow brought its Railrifle to bear on the Nimbus, burning through its armour and causing three wounds. 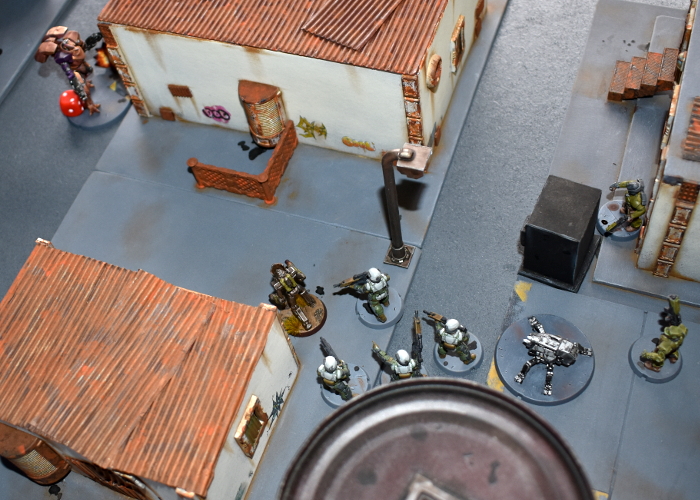 Epirians try to take down the Skyrunner.


On the left flank, the other Scarecrow and Contractors tried to slow down the Skyrunner, causing one strike missile wound, while the SecDef moved up to clear their line of sight. Hitting with both machine gun and rifle, they were still unable to cause any further wounds on the Skyrunner. 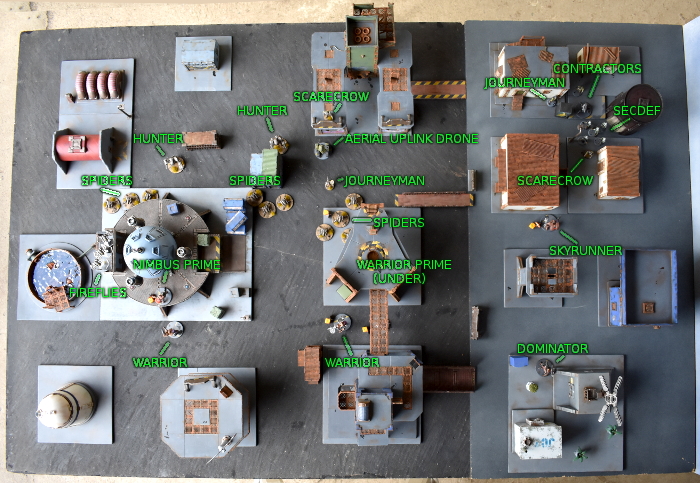 End of turn one.


End of turn One - Epirians have 3 VPs (two for Territories, one for Uplink), Remnant have 2 (Territories).

The Epirians gained priority, and sent the Fireflies zipping around behind the Warrior controlling the Remnant objective under the landing pad, scoring a hit but no damage. Ignoring the drones, the Warrior advanced and opened fire on the flakk Spiders, overcharging its Conflagration Launcher. The resulting blast obliterated three of the crawling drones. The Warrior Prime charged the remaining flakk Spider, ignoring the ineffectual defensive fire and dicing up the hapless drone with its phase blade.

The SecDef stood their ground, aiming a Focused Fire attack on the Skyrunner and once again managing to roll poorly for penetration. To show these mere human troops how it should be done, the Scarecrow bathed the Skyrunner in fire, turning the mighty Lorican suit into a twisted, molten mess.

With Command Points from the Prime cancelling out its suppression, the melee Warrior charged the machine gun Spider unit. Once again, the advancing Lorican armour weathered the defensive fire from the drones. With the huge number of attacks that the champion was able rain down with its Combat Gauntlets, this should have been an easy unit kill for the warrior, but some spectacularly bad rolling resulted in only two destroyed drones, with the lone survivor falling back towards the Epirian line. 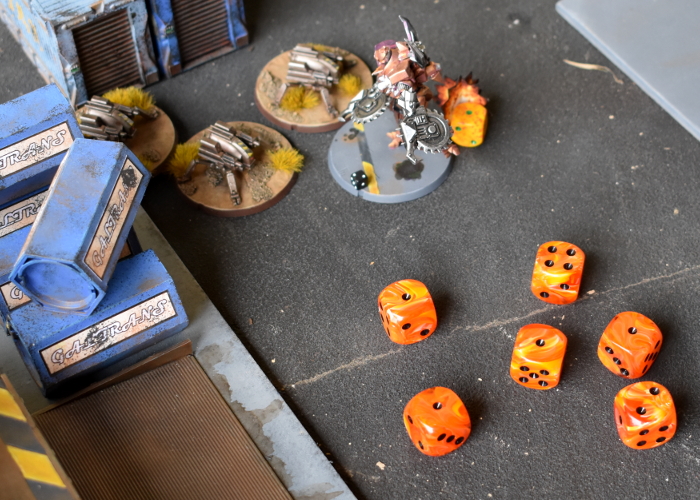 How NOT to roll for Penetration.


Carrying 5 suppression points, the Nimbus failed its activation check and retreated, shaking off 3 of those STs after the move.

With no clear target in sight, the spider drones on the Epirian right flank stayed put, Digging In on the objective, while the Flakk Hunter advanced on the melee Warrior. Opening fire with Flakk Cannons and missiles, the Hunter scored 7 hits, with a flakk shot and a missile each penetrating. With MAS3, the Warrior shook these hits off and carried on unscathed. 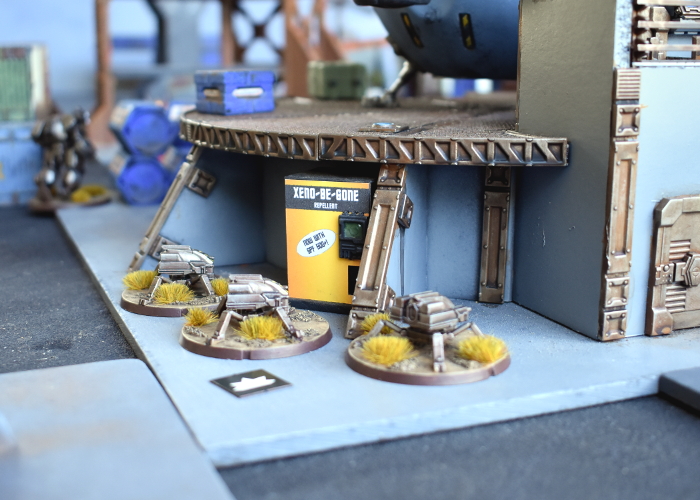 
On the Remnant flank, the Dominator performed a Hold & Fire action, firing its Conflagration Launchers at the scarecrow and obliterating the inflammatory bot. 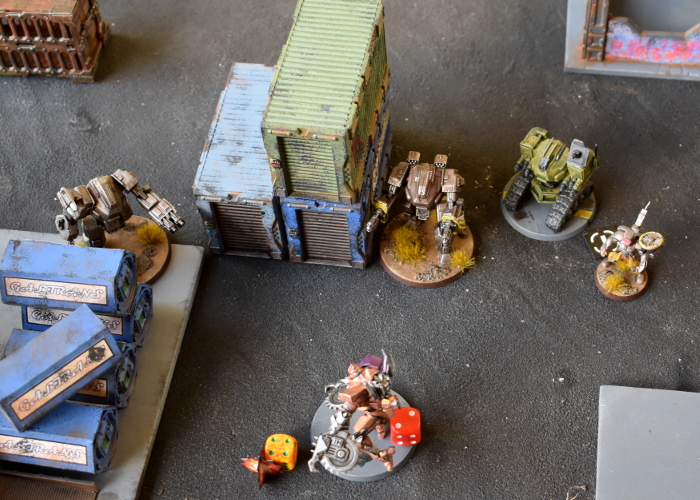 
With the Remnant forces all activated, the remaining Epirian forces brought weapons to bear, with the Contractors scoring a Strike Missile wound on the Dominator, and the Command Scarecrow pinging the Nimbus but not managing to wound. The commanding Journeyman called in an Aerial Drone Strike on the melee Warrior, but clearly the targeting data was corrupted, as the strike missed the Remnant Champion completely. The Uplink Drone was likewise unable to damage the Warrior, despite two penetrating hits from its Flakk Array, but the machine gun Hunter redeemed the Epirians somewhat, advancing and winging the Warrior with another strike missile. 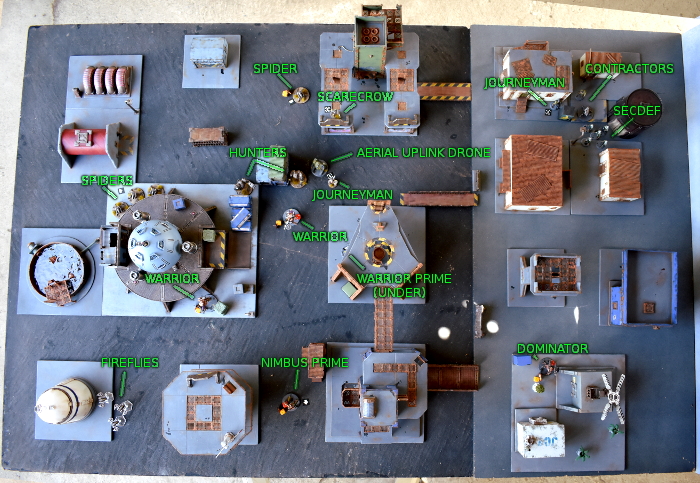 The Remnant gained priority, with the melee Warrior passing his activation check and charging the nearby Journeyman. The Journeyman's panicked defensive fire was wide of the mark, and he was torn apart by the warrior's Overcharged gauntlets.

The machine gun Hunter caught the Warrior Prime with some lucky shooting and caused a wound, while the Fireflies slowed their pace, moving around behind the retreating Nimbus but only managing to add an extra point of suppression. Spinning around, the Nimbus returned fire, bringing one of the flying drones down. 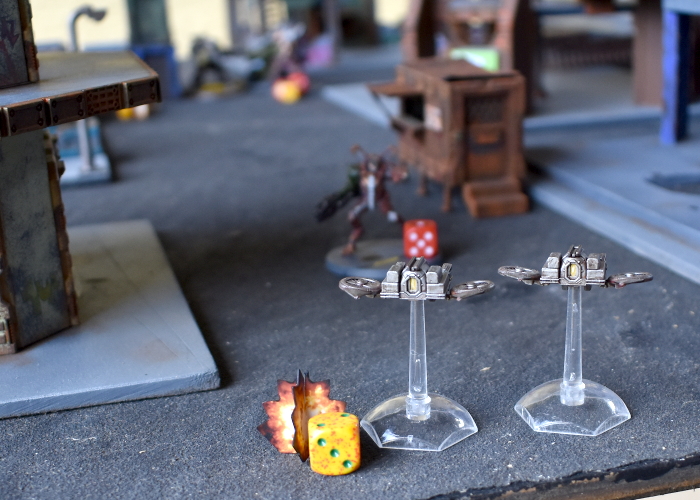 
Setting sights on the SecDef, the Dominator fired its Conflagration Launchers once more, the blast obliterating the elite unit.

Attempting to take revenge for their fallen Journeyman, the flakk Hunter and Uplink Drone blasted the melee Warrior, causing one more wound. Meanwhile the Warrior Prime advanced to draw a bead on the other Journeyman, its Overcharged Arc Splitter causing one wound.

Striking a pose, the Warrior by the landing pad brought Conflagration Launcher and Incursion Blaster to bear on the machine gun Hunter. Every shot hit, blasting through the war mech's armour. The Hunter exploded, shrapnel pinging off the other nearby Hunter mech. 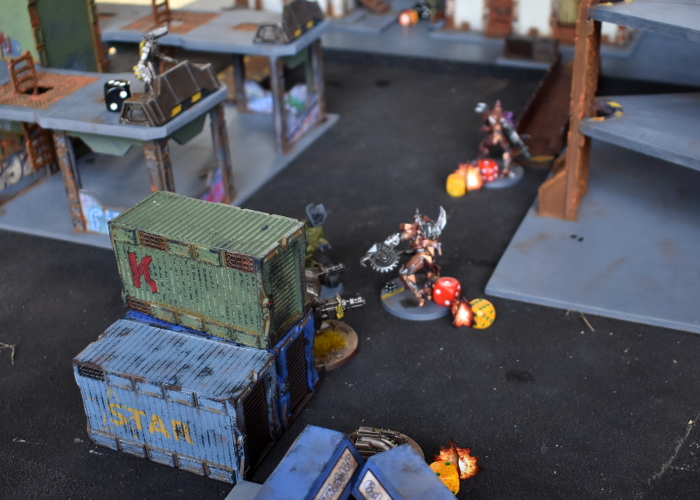 Things get messy in the centre.


On the Epirian's right flank, the Spiders remained huddled around their objective, while the sole surviving member of the other Spider unit dashed up the centre in an effort to get closer to the central objective and take it from Remnant ownership.

The Command Scarecrow drew a bead on the Warrior Prime, scoring three penetrating hits, enough for a wound. The Journeyman had less luck, rounds from his Dominator pistol bouncing off the Prime's armour, while the Contractors had similarly poor results lobbing another Strike missile at the Dominator. 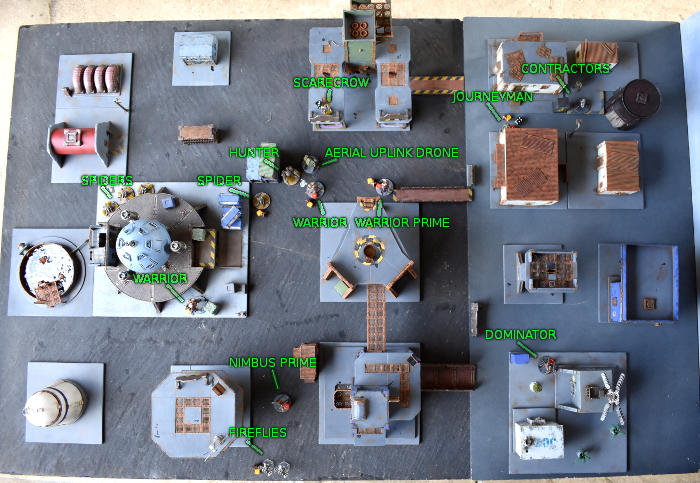 
End of turn three - Epirians scored another 3 VPs (two Territories and their third and final from the Uplink Drone) for a total of 9, while the Remnant scored 10 (2 for Territories, 3 for Epic Hero, and 5 for Alpha Strike), for a total of 19. As the target for Groundfall is 17, with a 3 VP margin, Victory falls to the Remnant.

The surviving Journeyman watched in disbelief as the massive battle suits retreated into the city. Watching his force being cut down around him light grain, he had not expected to survive the day. The Remnant Champions, however, had reveled in their moment of glory. They had no need to press their victory, and the tedious mopping up of the battlefield held no attraction for them. They left to seek more prestigious targets.