Every copy of Battle for Zycanthus includes the Maelstrom's Edge Card Game - a fast-paced, strategic card game in which your faction tries to secure as many resources as possible from a selection of planets and moons that are doomed by the Maelstrom. The game is designed for two players and takes around 15-25 minutes to play - perfect if you are waiting for a tabletop gaming table to free up.

This is a living ruleset, this version is dated 28 Dec 2015 and replaces all previous versions.

Playing area with four planet cards, a draw deck and a shared stockpile of resource tokens/counters

The playing area consists of four planet cards with a space above and below each for players to attach cards. A common draw deck represents the stream of refugees, events and situations arising as the Maelstrom draws closer to the four planets.

Anatomy of a Card


Each player takes turns performing actions enabled by the cards in their hand. The ultimate goal is to accrue as many resources as possible, with resources being generated each turn by the planets themselves. Resources represent anything useful to the spacebound fleets escaping the Maelstrom's Edge and could include raw materials, finished goods, water, fuel and people!

The winner is the player who ends the game with the most resources, and a big part of the strategy of the game revolves around handicapping your opponent while maximising your resources.

At this point, a player should have a faction card (on the table), 5 cards in hand (3 syphons and 2 military cards), 5 resources in their stockpile, and there should be 4 planets in total in the play area. Shuffle all remaining cards into a single deck (the 'draw deck') and place it within reach of both players.

Each player will also need a way of noting numbers from 0-10 secretly. This could be done with a pen and paper, but we've generally found it easiest to just use a calculator app on our phones.

The players should then toss a coin to choose who goes first. The winner of the coin toss can decide if they want to play first or second. The reacting player (the player who goes second) usually has a small advantage as they can respond to threats more easily.

Each faction card also generates one resource at this time and we recommend putting the resource onto the faction card so that you don’t get in the habit of forgetting to do so as the action increases! This resource represents reinforcements for the faction arriving in system, as well as more resources being committed internally by the faction.


Resources are distributed to players based on the number of syphons they have attached to a planet (this will always be '0' in the first turn, so you can skip this step on turn 1). Resource distribution is the most complicated part of the Maelstrom's Edge Card Game and is done as follows for each planet:


In addition to planetary resources, each player takes the generated resource off their faction card and puts it into their stockpile.


The player with the most resources goes first to represent their inertia. In the event of a tie, where both players have the same number of resources, toss a coin and the winning player can choose if they would like to go first or second during this action phase.
Each player MUST perform two actions in their turn. An action can be:

Playing a card from your hand is relatively straightforward. Simply pay the cost in resources indicated in the bottom right of the card - usually from 0 to 5 resources. Each type of card is played in a different fashion.

Syphon Cards
A Syphon card can be attached to any planet. You can attach as many syphon cards to a planet as you wish, though putting all your eggs in one basket makes them easier to defend, it does carry some significant risks!

Military Cards
Military cards can either be attached to an in-play syphon card, adding their defensive value to the syphon and making it harder to destroy, or can be put into an 'attack' area. Attack area cards can then be used to attack your opponent and the details of that will be covered below in the 'battles' section. Stacks of cards attached to syphons have no limit to their stack size, but stacks in the attack area are limited to two military cards per stack (modifiers can be added on top of them though). You can have as many attack stacks as desired, but attacking with one counts as an action. You can attack twice with the same attack stack in one turn but doing so will count as two actions. 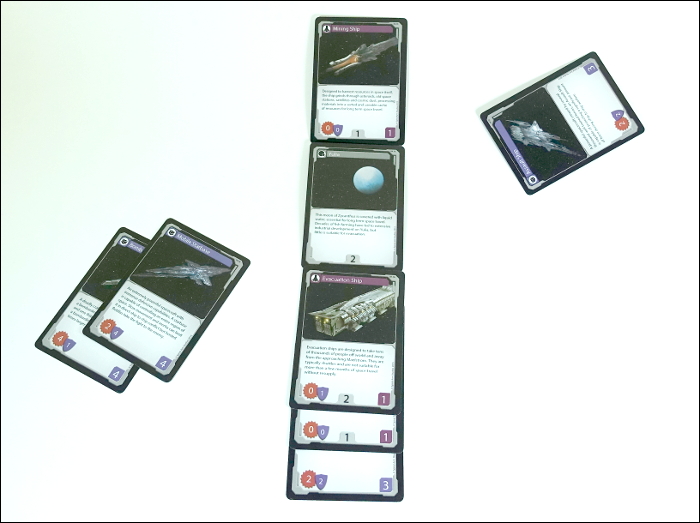 Event Cards
Event cards are unique in that they can be played at any time, even during the other player's turn (unless otherwise specified on the card). Event cards contain instructions and/or specific rules for that card which must be followed. Event cards also include two copies of 'The Maelstrom' event - each are a unique event which will be a fear in the back of your mind throughout the game. Playing an event on your turn counts as an action, but playing it on your opponent's turn does not count as one of their actions.

Modifier Cards
Modifier cards allow the buffing or nerfing of cards in play and are attached to cards in the playing area. There is no limit to how many modifiers can be applied, but any modifiers must be added in the order they went down. Modifiers typically have instructions on the card to follow. When a card with modifier or event cards attached to it is destroyed, those modifier and/or event cards are also destroyed.

Moving Cards
During the action phase, the active player may pay 1 resource to move a card from any location to any other location. They may do this as much as they want, paying 1 resource for each card they move.

After that, back to resource generation for another turn!


The game ends when the draw deck is empty, and when either player has 3 or fewer cards left in their hand. As such, neither player can be absolutely certain when the game will end but are aware that the end is near. The winning player is the one with the most resources in their stockpile at the end of the game.


Attacking and defending is a major part of the Maelstrom's Edge Card Game. The flow of a battle is as follows:

A planet has no defense value and cannot be destroyed. Instead, when attacking an undefended planet (where there are no military or syphon cards attached), the planet loses a number of resources from its stockpile equal to the combined attack value of the attacker's stack. The planet cannot lose more resources than it has in the stockpile.


Cards which are destroyed or discarded go into a discard pile, and are then out of use for the rest of the game.


That covers the rules for the Maelstrom's Edge Card Game. The best way to get to know them is to play a game or two, so dive right in! If you have any questions please post them in the Maelstrom's Edge community forum on DakkaDakka.com and we'll answer them there and will merge in any changes or FAQs to this page!

Thanks for reading and we hope you enjoy the game! 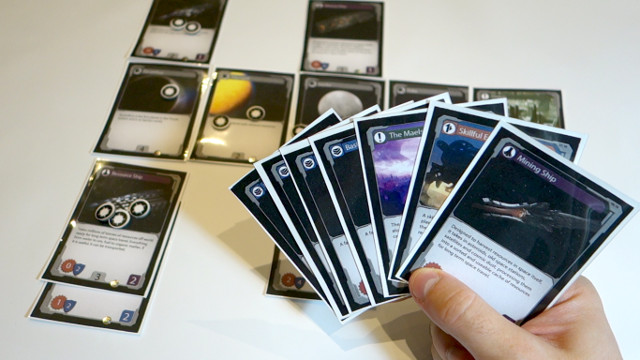