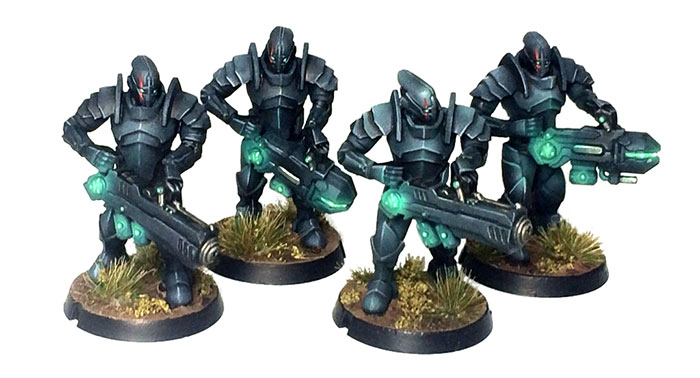 Two Karist Tempest Elites can be made from the following sprue: 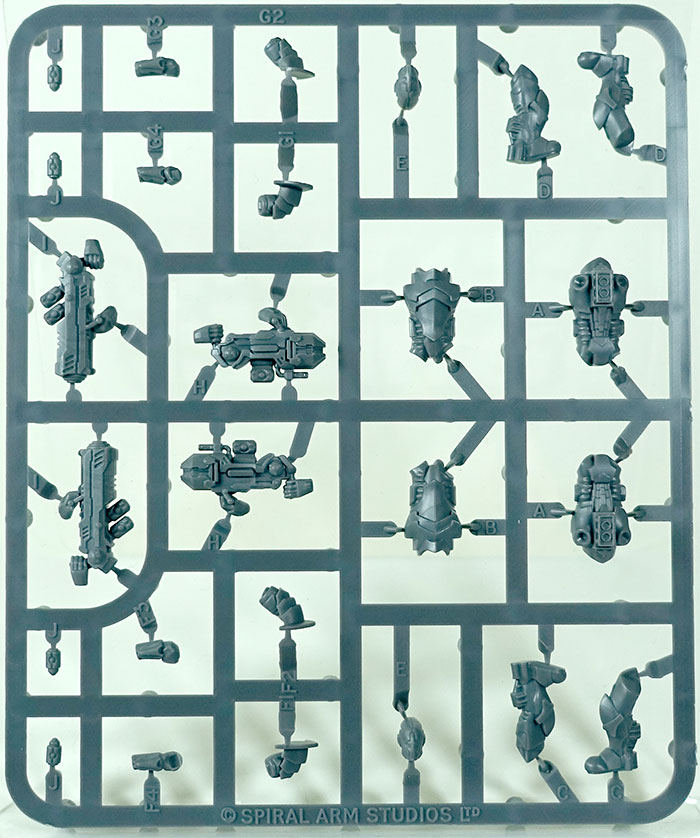 Karist Tempest Elites are a fun kit to build but have relatively limited posing compared to some of our other kits due to the combined torso and hips. They are also the most difficult and challenging kit to build in the Maelstrom's Edge: Battle for Zycanthus set. There is one error on the sprue labelling in that both bodies are labelled A/B, when in fact the bodies are different. If you look at the sprue, the top half builds one model, whereas the bottom half builds the other. Be sure to match legs C with the body nearest them on the sprue, and likewise legs D with the body nearest those. As with the Karist Troopers, be sure you trim the sprue connection points flush from the leg joins so that the legs attach as seamlessly as possible. Pay attention to the position of the feet when gluing the legs so that you dont end up with an off-balance model too! 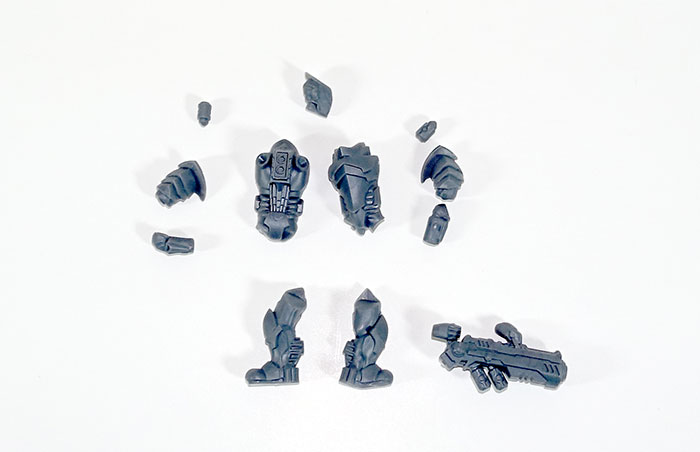 The arms are interchangeable with either body, so once the legs are attached, you are free to build how you like.

The arms can be quite fiddly to assemble as there are five items required for assembly (2x shoulder, 2x forearm, 1x gun). You will have a much easier time if you are using polystyrene cement as you can adjust while it is curing. Arms share letters for compatible/matched parts, specifically F and G. All 'F' parts need to be assembled together, as do all 'G' parts. Mixing will lead to strange poses but is possible if you are tring to convert. F3 and G3 are the model's right forearm, and F4 and G4 are the model's left forearm. Glue the shoulder pads on first, then the forearms, then the weapon.

Two weapons are available - the Ravager Pulse Cannon (part I) and the Coriolis Energy Launcher (part H). The Hellstorm Energy Mortar is a beefed up version of the Coriolis (part H), and while it uses the same part, would benefit on the tabletop from a paintjob that shows the weapon is more intense (typically represented by a stronger glow, veterancy markings on the trooper holding the weapon, etc).

The one part that people tend to miss when assembling the Tempests is part J. Two of these should fix in to the back of the body (part A) in the indents at the top, as the Tempest's armour is powered by cybel energy contained in those cybel cannisters. 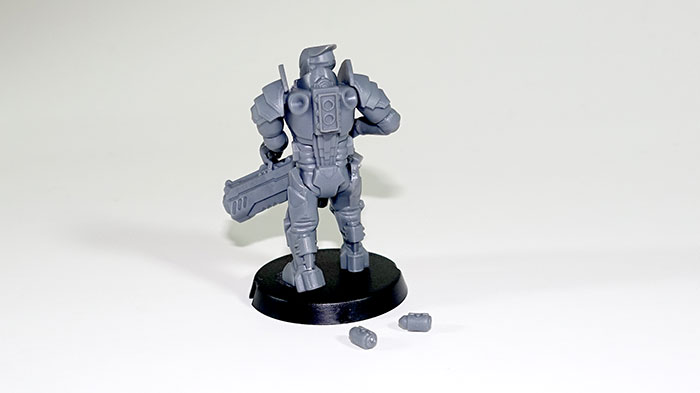 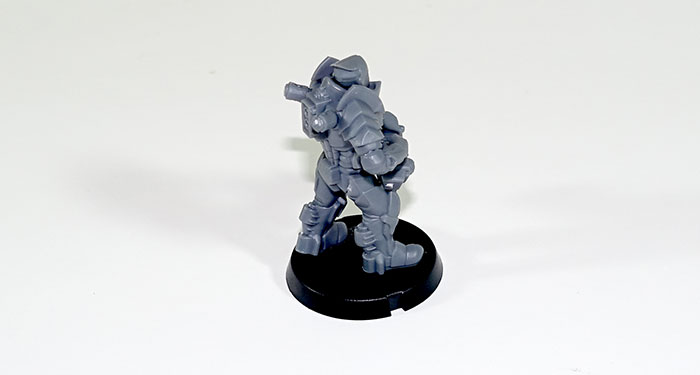 The heads have a reasonable range of pose available, but the addition of a touch of greenstuff will allow you a greater vertical range of posing instead of just the left/right posing range they have by default.

The Tempest sprue was the first we completed and has a few rough edges compared to our other models as we learned. The 5 part arms/guns are due to the forearm armour plating being a design that needs to be split in injection moulded tooling, and the main side effect of that was that it became very difficult to test the sprues before production due to the size of the pieces, and was made even more complicated by the size of the ravager pulse cannon. As such, the keying on the left forearm/shoulder connection is slightly off, so we recommend you affix the gun while the forearm glue is still curing so that you can adjust as desired. A simple but effective conversion for improving the Tempests is to take a tiny slice of plastic off the left wrist forearm connection point to allow a softer angle on that wrist. 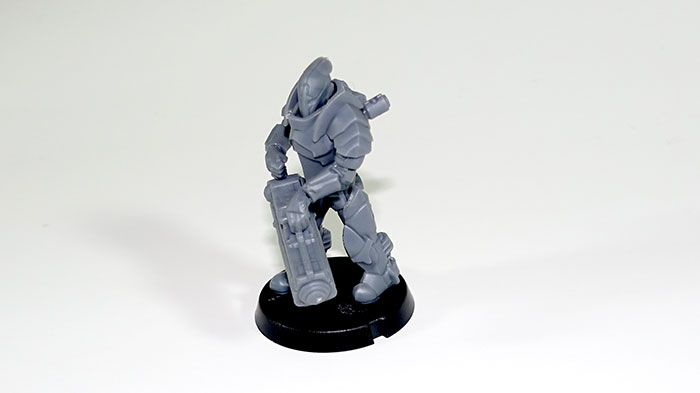 Here is a Karist Tempest Elite that has had its arms trimmed ever so slightly, creating a non-stock assembly which is an easy conversion to attempt: 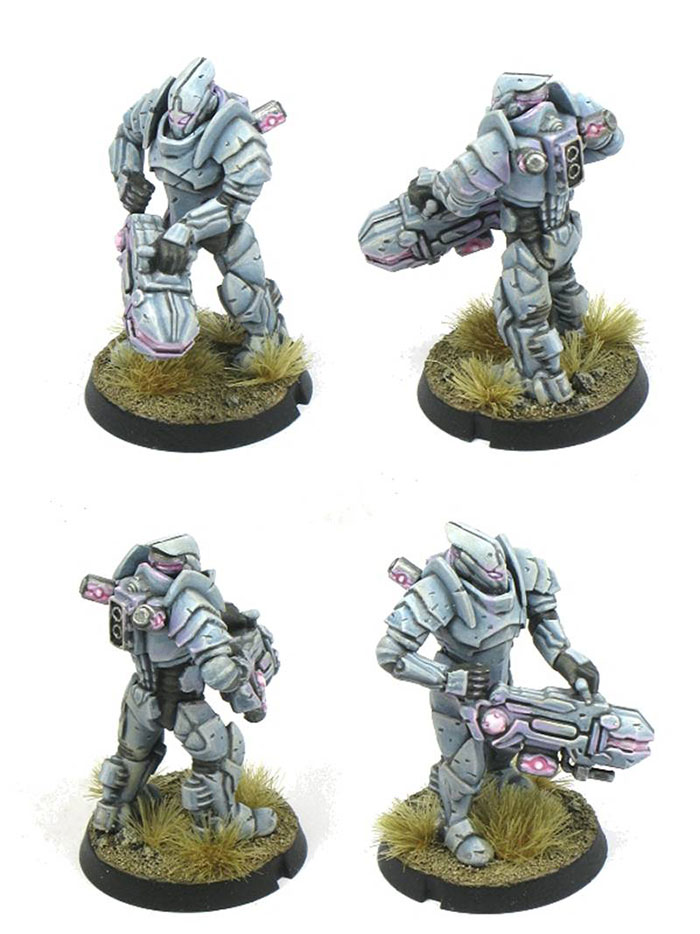