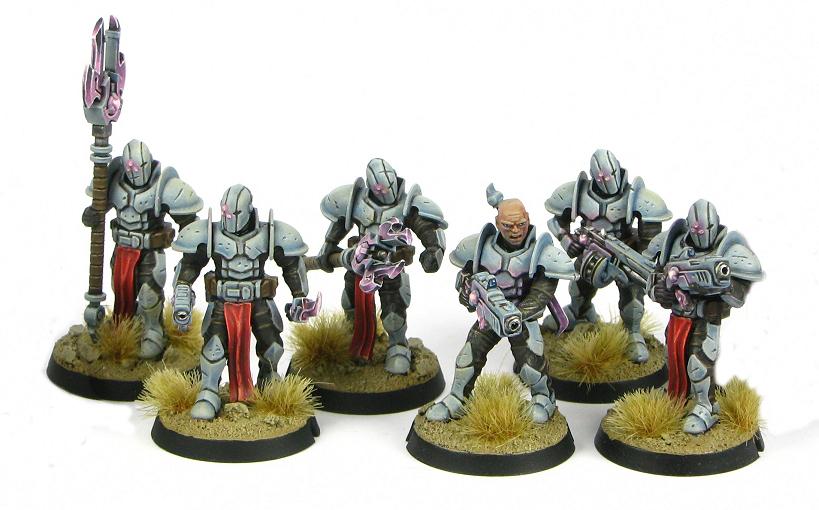 Karist Praetorians are fairly straightforward to assemble, being just a modification of the basic Karist Trooper. Three models can be assembled using the following sprues: 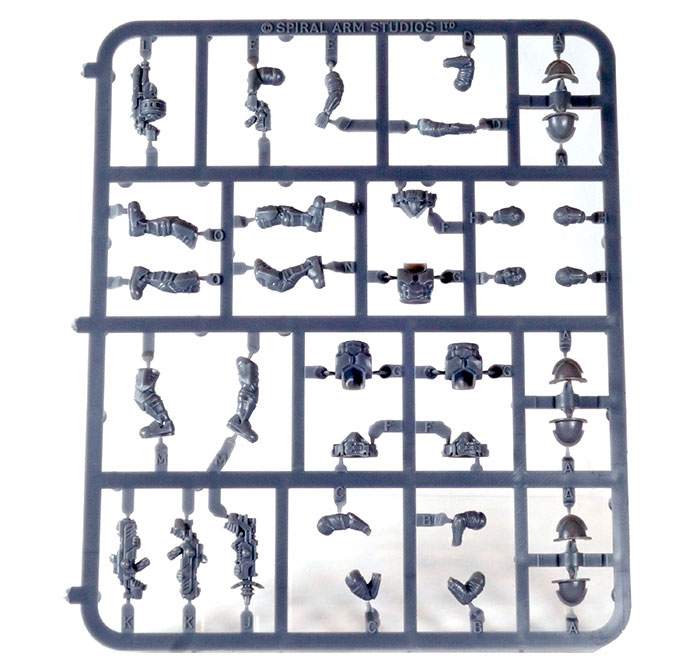 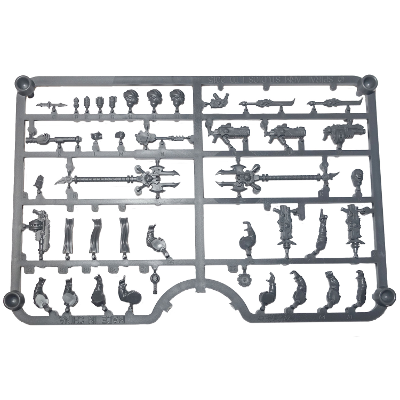 You will need the below parts from those sprue. We've used one rifle and one pistol just to show how they go together, but you could of course choose to use all rifles or all pistols when you assemble your own unit. 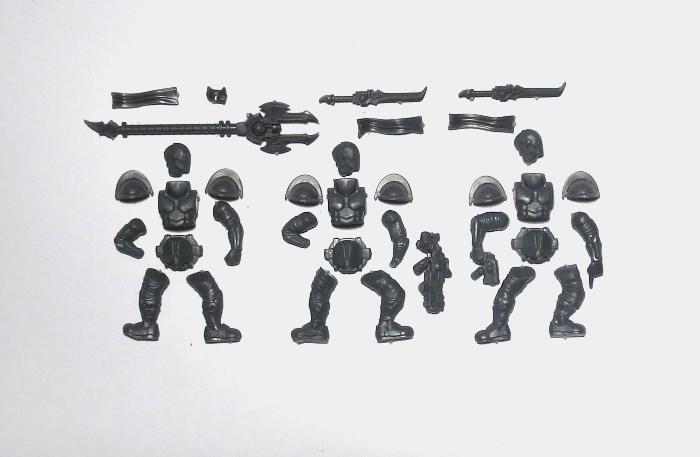 One design decision that might seem a little odd is the splitting of the legs from the lower torso/crotch piece. This had to be done because the upper leg armour is not possible to mould in injection moulded plastic without having to make some ugly tweaks to it that would have really reduced sharpness beyond what we were willing to tolerate. We decided to split the legs at the top instead, allowing ease of conversions and sustaining the crisp armour plates.

All three lower torsos (part F) are identical, as are all three torsos (G). Legs are paired with the same letter (eg; part M is both the left and right leg of the same pose). We recommend the first step in your Karist Trooper assembly should be sticking the legs on the lower torsos.

Add the loincloths next, as this is easiest before there are other parts to get in the way. There is a recess on the inside top of each loincloth that fits neatly over the groin armour. All three loincloths work with all three leg poses, but as usual it's a good idea to do a quick dry-fit before gluing to check that they look how you want them. 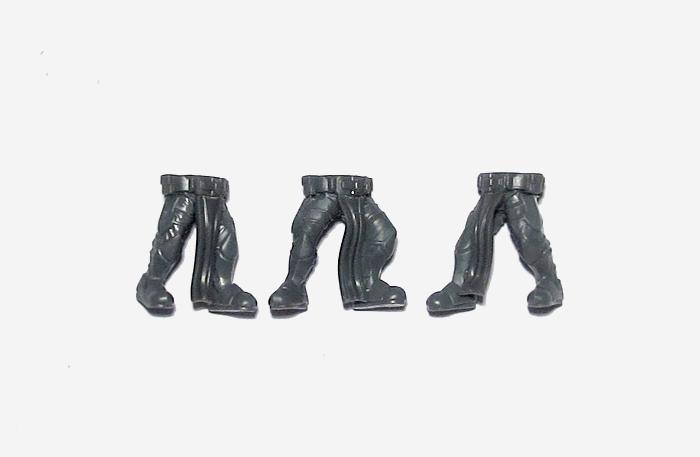 The most complex part of the build is the arm / weapon assembly. This is because three points need to be glued at the same time - the arms to the torso and the hands to the arms. If you are using polystyrene cement, you'll get a minute or two of re-posing time which can make this a lot easier. Arms are paired by code as well (eg; part C is both a left and right arm that go together). Mixing up your paired arms will mean some odd posing!

The shoulderpads (part A) are designed to be optional if you are so inclined - underarm detail is sculpted on the upper arms. We've not made any models without them though as we enjoy the distinctive profile the shoulderpads gives to the Karists. If you postion the arms so that the shoulders are just below the top of the armour, the shoulder pads will butt up neatly against the sides of the torso. 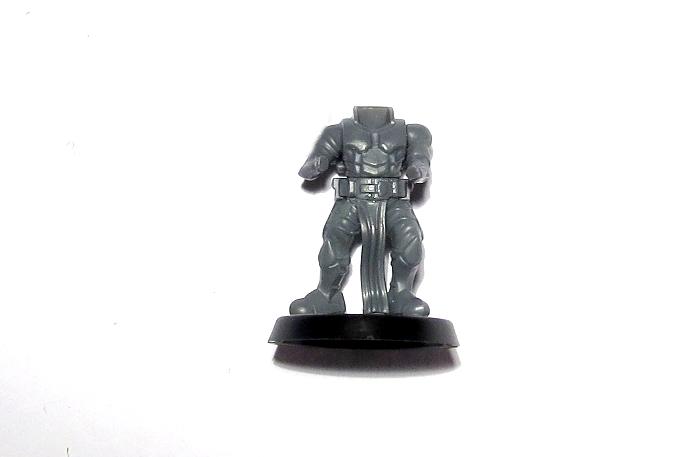 From the Karist Trooper sprue, Part K is the Karist Pulse Carbine. Part J is the Radwave Emitter and part L is the Grenade Launcher.

There is no Karist hand that holds the cybel blade neatly, although with a little conversion you can make the closed fist work. The easiest approach though is to glue the sword to the model's back, where it would presumably be held in place with a magnetic lock. 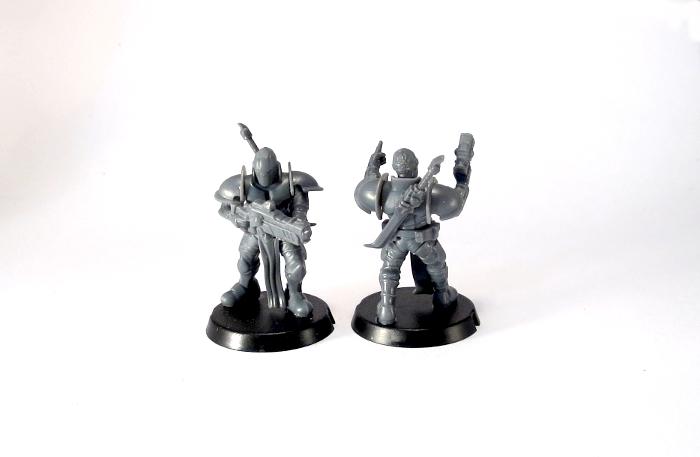 The cybel glaive does have a hand on the expansion sprue to hold it. You can use any of the right arms from the Karist Trooper sprue for this. Some of the rifle arms have a small wedge of wrist attached to angle the rifle correctly across the body. While not essential, it will look a little better if you cut this wedge off along the front edge of the forearm armour. 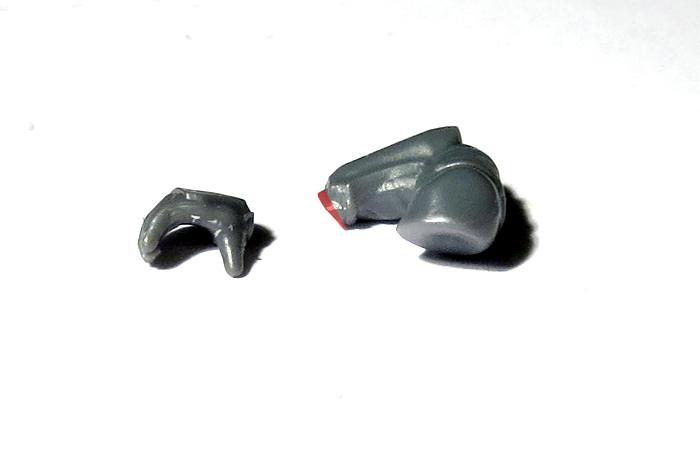 Once the hand is attached, you can glue the arm onto the torso, and then the glaive into the hand. 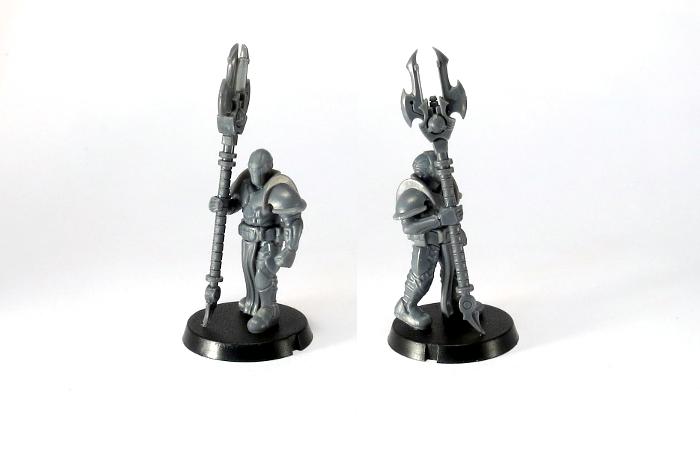 As with most models with poseable heads, we recommend building the whole model and then putting the head in place last of all. 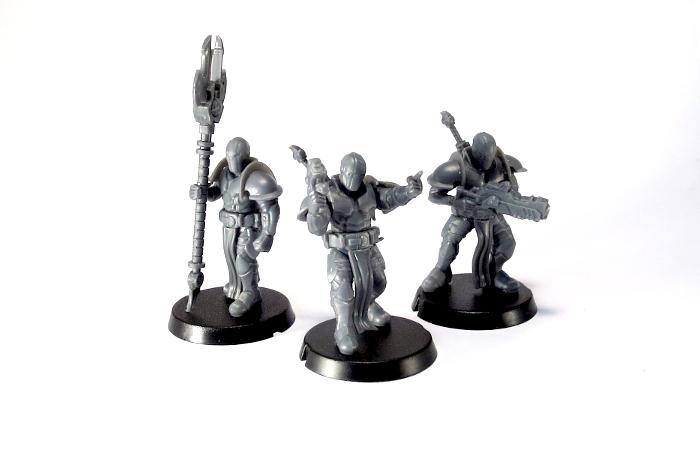 For some more ideas for building or converting your models, check out the Karist Praetorian Spotlight article here.