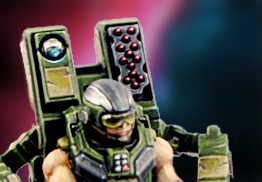 Master Bot Handler
Robots are the workhorses of the Epirian Foundation. A Master Handler's control transforms them into the elite.

Fire Assist (+1)
A model with this ability is able to fire (+1) more weapons during each round of shooting than they are normally allowed. Note that when a model is not allowed to fire at all, this ability does not allow them to.

Heavy Gunner
This model ignores the Heavy ability, except while CQ fighting.

Bot Protocol - Swarm Defense
(squad ability) While enabled, this unit has the Dodge (X) ability, with X equal to the current number of models in the unit with this bot protocol. When one or more hits are ignored by this Dodge during a round of shooting, immediately roll a D6. If the result is equal to or less than the number of hits that were ignored, then a single model in the unit with this bot protocol suffers an automatic injury.

Micro Drone - Aerial Uplink
The model's Aerial Drone Strike has its Limited Use ability improved to (2).

Micro Drone - Command Booster
The model's command range is increased to 24”. For a Command (0) model, this instead gives it a normal 18” command range.

Micro Drone - Defense
Can be activated once per game at any point during the turn. When activated, the model gains the Field (2) ability and may use the Micro Defense Drones weapon profile for the remainder of the turn.

Micro Drone - Spotter
The model gains the Paint (4+) ability for all its non-CQ attacks, as long as they are not Ind Fire or Smart attacks.

Bot Repairs (2D3)
(squad ability) When this unit completes an Advance & Fire or Dash action, as long as it isn’t on the move or pinned, it may select one other friendly unit within 6” that contains at least half robot models and isn’t on the move itself. The selected unit immediately removes 2D3 number of STs. This ability cannot be used into or out of a building.