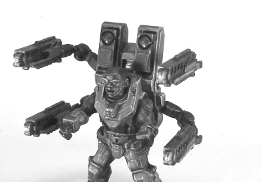 (Field (D3))
Ignore D3 hits each round of shooting. Cannot be used the same round that cover or another ability ignores hits.

Fire Assist (+1)
A model with this ability is able to fire (+1) more weapons during each round of shooting than they are normally allowed. Note that when a model is not allowed to fire at all, this ability does not allow them to.

Micro Drone - Command Booster
The model's command range is increased to 24”. For a Command (0) model, this instead gives it a normal 18” command range.