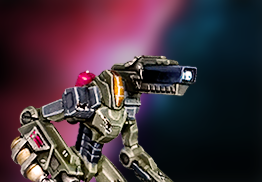 Scarecrow Sniper
The ultimate security bot - a Scarecrow is always watching and its Railrifle rarely misses.


Multi-Unit Selection: Up to 2 separate Scarecrow Sniper units may be taken as a single

Advanced Tracking
Long ranged weapons fired by this model at short range do not automatically miss.

Bot Protocol - Overdrive
Increase this model’s MV value by +1 for every command point a Bot Handler expends issuing this unit an order, to a max of +5. This lasts only until the unit next activates or all models in the unit with it are killed.

Bot Protocol - Rapid Fire
During the unit’s main action, this model gains +1 SHO for a single weapon it fires. This ability must be enabled by a Handler and lasts only until the unit next activates or all models in the unit with it are killed.

Marksman (+3)
Add +3 to the model’s SKL when shooting, except during CQ fighting.

Point Defense Action
Once per turn, when a visible friendly unit within 6” is about to perform defensive fire, this unit may first perform point defense against the same enemy unit. This is resolved as defensive fire, but counts as being at standard range and short ranged weapons cannot be used.

Chemtek Sprayer
Enemy units containing at least 1 organic model treat the area within 6” of a model with a Chemtek Sprayer as lethal ground.