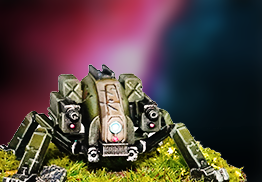 Spider Drones
A Spider Drone's low-profile and unique leg design makes them nigh impossible to shake from a defensive position.

Command (0)
Command points can be allocated to this model, not exceeding its WP. This model can issue an order to its own unit when it activates, removing STs from the unit equal to the command points expended.

Dug-in (+1)
The unit gains +1 to their cover value while pinned.

Tactile Bot Interface
This model has the Command (0) ability.