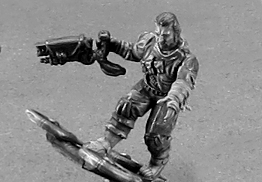 Skyboarders
Adrenalin junkies who crave speed, Skyboarders tear across the battlefield on ramshackle boards cobbled together from scavenged parts.

Booby Traps (1)
During its main action, this model may expend one of its allocated command points to trigger a booby trap, up to a maximum of once per turn. When a booby trap is triggered, select an enemy unit which is both taking cover and visible to the model triggering it. That unit gains D3+1 STs. A single enemy unit cannot be affected by more than one booby trap per turn.

*Capture: Roll to penetrate against the defending unit’s MAS characteristic (instead of its AV characteristic). Capture attacks made against large models reduce their DAM to 1.

Grenade Harness
This model has cluster grenades, molotov bombs and overcharged powercells. A model may not have more than one grenade harness.