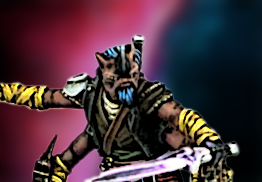 Add-on: May add up to 2 Hakoyu Grand Master to the following units, without exceeding their normal maximum size:

Bloodthirsty
This unit can elect to perform a Charge action instead of a compulsory Dig-in or Shaken action, but it must charge the enemy unit it can reach by the shortest route.

Deflect (2)
(squad ability) A unit with this ability can ignore up to (X) melee hits inflicted upon it during a round of CQ fighting. Add +1 to a unit's Deflect ability value for each additional model in the unit that also has the Deflect ability. For example, a unit containing 3 models with Deflect (2) would be able to ignore up to 4 melee hits during a round of CQ fighting. A unit that utilizes its Deflect ability to ignore one or more hits cannot also ignore hits via any other method, such as the Dodge or Field ability.