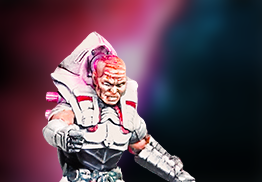 Kaddar Nova
The Cybel reactor carried by these revered priests is a source of immense power, but also a deadly burden.

Field (1)
Ignore 1 hit each round of shooting. Cannot be used the same round that cover or another ability ignores hits.

Stoic
If this unit fails an activation discipline check, it performs a Dig-in action instead of a Shaken action unless the number of STs on the unit is at least double their discipline. When shell-shocked, this unit can pass a discipline check on a roll of 6, instead of failing automatically.

Reactor Detonation
After finishing a charge and its resulting defensive fire, the model may detonate, killing itself and replacing the normal round of CQ fighting. Center the AoE (LB) template over where the model was. All units (friend and foe) under the template suffer D3 hits + the number of models in that unit under it. These are PEN 4, DAM 2 hits with the Ignore Cover ability.

Commune Reactor
If desired, reduce result needed to pass a discipline check by 1 after seeing the result of the roll, but doing so gains the unit +D3 STs after the check is passed.

Shield Reactor Pack
When deploying a Kaddar Nova, choose a shield mode, and again each turn after determining its main action. The effects of a mode last only until it next activates.
A. Kinetic Boost: MV and EVS are doubled.
B. Shield Mode: AV is doubled and has Field (2) ability.
C. Gauntlet Overload: The Kinetic Gauntlet uses its overload profile. This mode cannot be chosen in consecutive turns.