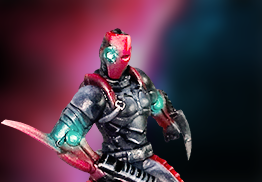 
Multi-Unit Selection: Up to 2 separate Shadow Walker units may be taken as a single

Fearsome (1)
Enemy units within 12” count as having 1 additional Psych ST while within range. Not cumulative with other Fearsome abilities.

Precision Kill
During casualty removal, penetrations with this ability are applied first and by the firing player.

Teleport (24")
When performing a Dash action, this unit can make a 24" dynamic move, but cannot end within 6” of the enemy or be on the move. If ending a teleport touching an obstacle or area terrain, it gains +2D3 STs. A unit cannot teleport in consecutive turns.

Commune Reactor
If desired, reduce result needed to pass a discipline check by 1 after seeing the result of the roll, but doing so gains the unit +D3 STs after the check is passed.

Cybel Mines
Cybel Mines have the Mine (2D3+1) ability.

Mine (2D3+1)
During an Advance & Fire action, a model may set a mine instead of firing a weapon, placed touching the model. A mine is not active until the unit that placed it ends an action more than 6” away. The 6” area around an active mine is a minefield. A unit that moves through a minefield triggers it, gaining 2D3+1 STs, after which the mine is removed from the game. A unit that ignores dangerous ground also ignores a minefield.