The Karist Enclave are a secretive organisation that operates on doomed worlds close to the Maelstrom’s Edge. The motivations of the Heirarchs who lead them are only guessed at by outsiders, but their missionaries can be found in cities all across the Edge, extolling the core belief of the Karist faith: that the Maelstrom isn’t the end of life, but the beginning of a new one.

The Enclave had its origin soon after the Capital Worlds were lost to the Maelstrom. A small passenger liner, the Kariman’s Breath, was caught in a cybel tunnel as the Maelstrom’s shockwave hit. Most of the crew and passengers on board died, but when the battered ship emerged into real space, fourteen men and women had survived their brush with annihilation. Instead of being killed when the shields failed and the ship flooded with energy, the survivors reported extraordinary feelings and visions as the energy washed over them. 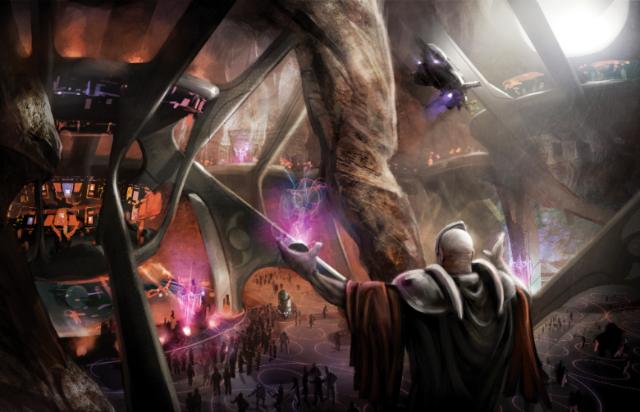 Their experiences led the survivors to conclude that the Maelstrom brought more than just destruction, that as the wave of energy swept across them, they had caught a glimpse of another place. The fourteen left alive on the Kariman’s Breath founded the Karist Enclave, a religion that has grown into a powerful force across the Maelstrom’s Edge, preaching the promise of ascension and that the Maelstrom heralds the coming of a new phase of humanity’s existence. The Karist Enclave coalesced around one central idea - that if you prepared your body and spirit for its embrace, the Maelstrom wouldn’t destroy you, but your consciousness would be transferred to another plane, a great afterlife for those who were truly deserving of the honour.

In battle, the Enclave’s forces are clad in distinctive scalloped armour, and armed with weaponry that fires pulses of cybel energy. Frequently, they are also accompanied by the Angels, ethereal alien creatures that live off cybel energy, kept enslaved by their Keepers to inflict huge damage on the Enclave’s enemies. Shadow Walkers, acting as the hands of the Heirarchs, use their skills in stealth and deception to infiltrate the governments and armies of their foes.


Ascension drives all of the Enclave’s actions, from the missionaries who travel to doomed worlds to the soldiers who ‘liberate’ those planets viewed as essential by the Heirarchs. Whether that strategy is defined by the number of Karist believers on the planet who need to be saved or the resources that can be appropriated is a matter of some debate amongst critics of the Enclave’s operations. Whatever their motivations, the Karist Enclave is a growing force across many of the worlds threatened by the Maelstrom’s Edge.