From the factories and the slums, the mining complexes and the farms of the galaxy come the Broken, a growing movement of citizenry angered by the lack of opportunity to escape the Maelstrom. They are a diverse mix of workers, aliens, and rogues left on doomed worlds by the ruling parties.

These survivors take matters into their own hands after being left behind. They pool their resources and knowledge in a communal effort to escape the Edge. Derelict ships are repaired. Affluent people’s ships are stolen. Government ships are commandeered. Any ship available is pressed into service for the Broken. They are a group unlike any ever seen in the galaxy. Fear, hate, anger, need fused them, these abandoned people, into an unstoppable force with one goal - escape the Edge. The Broken is a term used to unify all such desperate people across the Edge. Their motivation, methods, and sanity vary wildly from fervent revolutionaries to callous pirates to the few who have stared into the maw of the Maelstrom only to come away unhinged.

When the Broken arrive to do combat, it is rarely for a pitched battle. The Broken fight for their freedom, for resources, ships and information, usually against a far better equipped and trained military force. In combat, the Broken rely on stealth, subterfuge, and sabotage, backed up by sheer weight of numbers to overwhelm their opposition. Although the average combatant from other factions may be disciplined and well equipped, they often also have a narrow mindset, moulded by strict training. The strength of the Broken lies in the sheer variety of fighters from all walks of life, each bringing their own unique skills with them, honed through desperation and the need to survive. This gives the Broken a large amount of flexibility in how they can approach any goal. 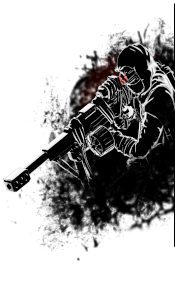 One of the greatest equalisers of the Broken method of combat is electronic warfare. Amongst the ranks of the warband will be a variety of ex-engineers, programmers, blueprint pirates and information merchants, all well versed in the electronic systems and technologies of their worlds. Warbands use these skills to foment dissent on worlds, steal technology and blueprints, and falsify documents. On the battlefield armed with a simple data link, one skilled individual can circumvent security systems, interrupt power grids, broadcast false intelligence, and create fake sensor data to confuse their opponents. Although enemy mechs and combat suits are hardened from direct attack, the barrage of denial of service attacks and unreliability of automated security systems in the face of a Broken attack levels the playing field considerably.


These electronic attacks are supplemented by the warband’s leader’s skill as they direct the fighters under their control. A Forsaken Chieftain with a small band will favour stealth and misdirection. A Jackal Warlord may throw drug-crazed berserkers at the enemy, or take the enemy up close and personal with short ranged blastguns. A more organised Revolutionary warband may employ combined arms, using fast vehicles and directed explosive weapons to achieve their goals.